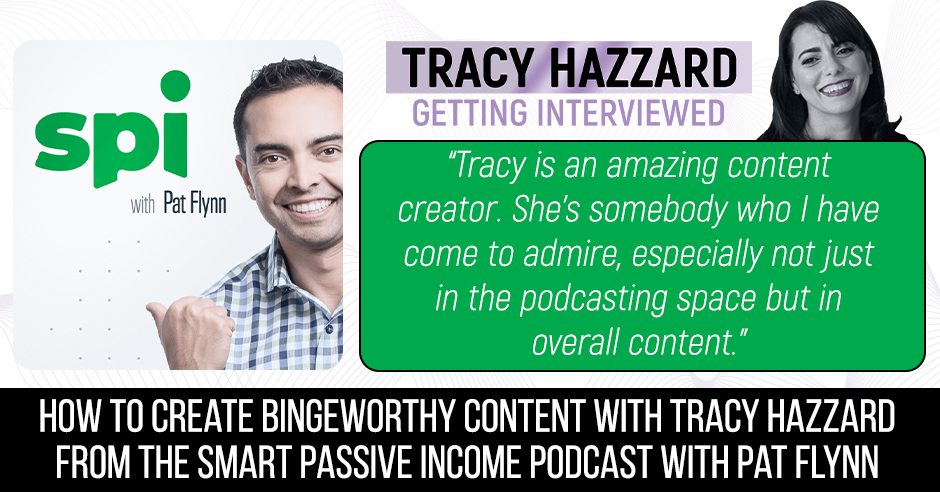 With so many podcast shows competing for the most listeners and followers, releasing bingeworthy content has never been more serious. Hosts scramble to invite famous guests, produce engaging discussions, and provide enticing promos as fast as possible. But what does it truly take for a podcaster to successfully capture the hearts (and ears) of many? Tracy Hazzard joins Pat Flynn of The Smart Passive Income Podcast to dissect the two most important elements of a bingeworthy podcast: to educate and to entertain. She also explains why hosts should focus on revealing their authentic selves every episode to attract the audience they truly want to touch.

Question 1: What else allows for a bingeable podcast?

It doesn’t have to just be a podcast. If you have bingeable blogs, if you have bingeable videos, it just doesn’t matter what genre it is. But in order to create something that’s bingeable, it has to have a return again and again. It has to have something that’s giving back to the listener, the viewer, the reader. It’s giving them something over and over again and satisfying something that’s a necessity for them. Sometimes that’s learning, and sometimes that’s entertainment. When we pull the two together, when we edutain, we get even better. If we can do both at the same time, that’s beautiful.

But what we have is these connections that we’re building over time. Those that try to vomit every piece of information about their entire life, their entire strategy, their platform, their programs, all of that. When you try to do that all at once to someone, you just overwhelm them. The best thing that we do is when we do it slowly over time, giving them little bits of ourselves, little pieces of information, not because we’re being stingy with the information, but because we’re not overwhelming them. We’re allowing them to digest it, bring it in, get the understanding of it. That’s the really beautiful thing about bingeable content because I learned something from this. I took action with it. Now there’s got to be more. I’m going to go back to the person who made me successful or who gave me that little tip. Every time we can do that, where they’re taking some nugget away and they’re applying it into their life, then they’re going to want to come back. That’s from the education side of it, the learning side of it.

Let your humanness come through in every podcast episode. People identify with that, and they want more of that. #podcastinterview #TheSmartPassiveIncomePodcast #PatFlynn Click To Tweet

From the entertainment side of it, simply being yourself, like this is not a persona that you can maintain with as much content as you push out. When we did our first show, we did five days a week. There is no way we could be absolute, amazing, perfect experts with everything perfectly aligned and have everything scripted out and ready for us. We couldn’t do that. Your humanness comes through and people identify with that. If they like that, they’re drawn to that, and they want more of that. 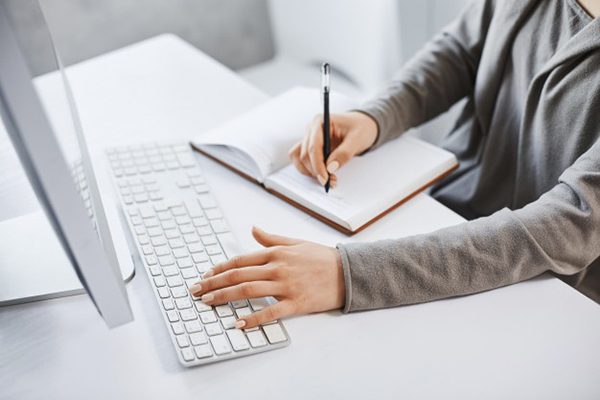 Bingeworthy Content: When you try to provide information all at once to your audience, you will overwhelm them. Instead, do it slowly over time, giving them little bits of yourself that they can easily digest.

She also did say that lots of them have horrible sound. Lots of first episodes are bad. And that’s okay. But then I go to your most recent or the most recent one that interests me and I’ll check that one out next. As long as the sound’s improved from the beginning to the end, I’m okay. I will binge your show. But what I’m going to do is at that point is then check and see, “Okay, you said you were going to deliver this. Now, do you deliver that in your episode?” If that’s there, and I resonate with you as a human, and I like what you have to say, and you’re not annoying me or your process is abrupt to me as a person, I’m going to keep listening and I’m going to give you a chance and I’m going to binge listen. She said, “There are very few things that will make me quit. A show sound is one of them though.” If it’s clicking or has really bad sound, that’s the only one she said from a technical side that would make her quit a show.

Question 2: In the entertainment side of things, we all know that you can have the best information in the world, but if it’s not delivered in a way that can keep people listening, it’s kind of all for nothing. How might you coach somebody to be more entertaining if they feel that they are just not entertaining?

Entertaining is like a loose term. We don’t have to stand on stage and tell jokes. I occasionally will kind tell that same joke about having my hair done, and people always laugh in the audience. But it’s not a common thing to be a great at joke telling and have to be a comedian to be the host of a show or have to be an actor and be the host of a show. Actually, it’s really harder for them. That’s what I’ve heard from a lot of the clients I work with in Hollywood. It’s harder for them to do the show because the show requires them to be themselves. That’s harder. At the end of the day, we want to be ourselves. If we’re the geeky dad who tells jokes that make our children cringe, then go for that. Be that guy. If you’re the woman who just is just serious about it and get stuff done, be that woman. 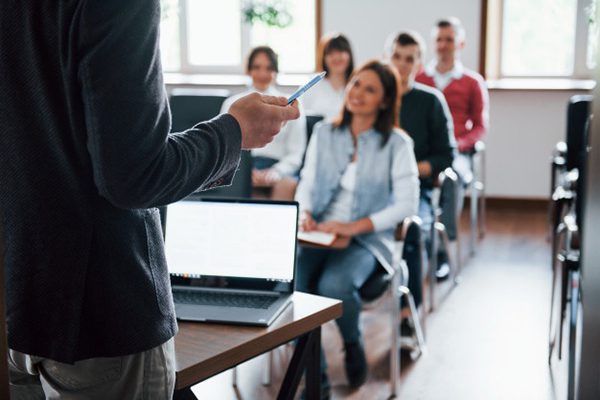 Bingeworthy Content: It’s more important to reach the right type of people that you can influence and be referred to than merely getting giant numbers on it.

The audience that you’re going to attract to that, at the end of the day, are probably your best clients. I’m an action taker. I’m the one who’s going to be like, “I’m going to research it and I’m going to study it, but I’m going to figure out exactly how to do it. I’m going to just jump in and I’m going to get started.” Because the sooner I get started, the sooner I will know if it’s going to fail or not. I’m that person. That’s the kind of people I want to attract. It’s how everything in my platform is built. It’s for the people who don’t want to do a lot of that stuff, but want to take action and get started quickly. It’s an acceleration model. Attract the right people for you and do that by being you.

Podcasting With Tracy Hazzard From The VIP Access Podcast With Melanie Herschorn Starting a podcast show is more than just releasing episodes and patiently waiting for listeners to come...

As the internet becomes the main arena for business engagement, producing unique content aside from traditional adverts is highly needed. One of the best ways to do this is by...

Designing Your Product For Online Sales – Interview With Tracy Hazzard From On The Shelf Podcast With Timothy Bush The pandemic has made a huge impact in a lot... 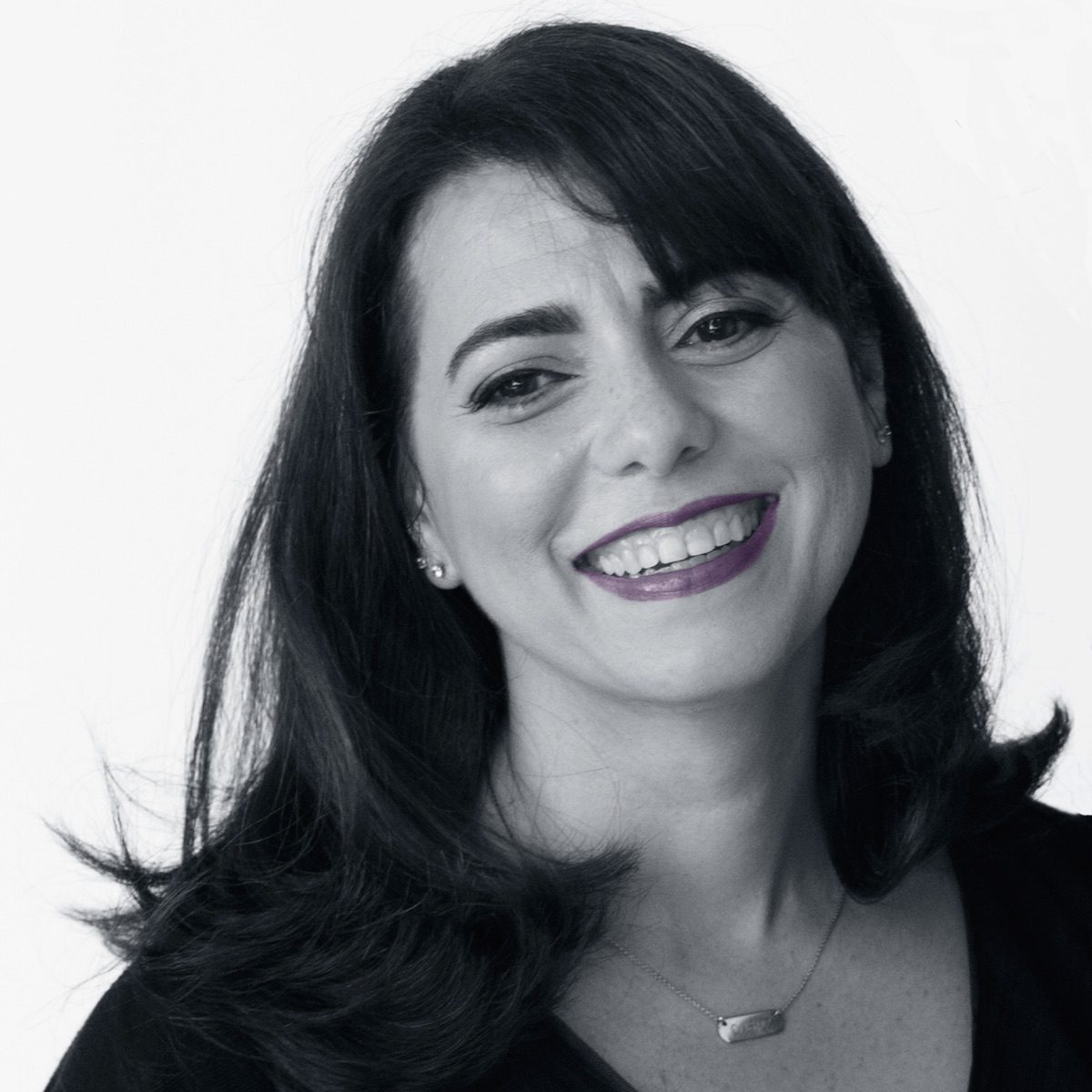